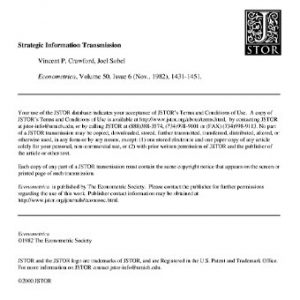 This paper develops a model of strategic communication, in which a better-informed Sender (S) sends a possibly noisy signal to a Receiver (R), who then takes an action that determines the welfare of both. We characterize the set of Bayesian Nash equilibria under standard assumptions, and show that equilibrium signaling always takes a strikingly simple form, in which S partitions the support of the (scalar) variable that represents his private information and introduces noise into his signal by reporting, in effect, only which element of the partition his observation actually lies in. We show under further assumptions that before S observes his private information, the equilibrium whose partition has the greatest number of elements is Pareto-superior to all other equilibria, and that if agents coordinate on this equilibrium, R's equilibrium expected utility rises when agents' preferences become more similar. Since R bases his choice of action on rational expectations, this establishes a sense in which equilibrium signaling is more informative when agents' preferences are more similar.