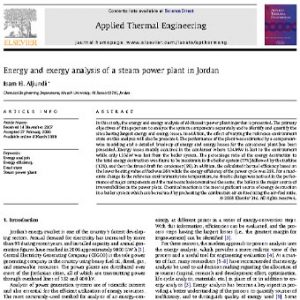 Title: Energy and exergy analysis of a steam power plant in Jordan

In this study, the energy and exergy analysis of Al-Hussein power plant in Jordan is presented. The primary objectives of this paper are to analyze the system components separately and to identify and quantify the sites having largest energy and exergy losses. In addition, the effect of varying the reference environment state on this analysis will also be presented. The performance of the plant was estimated by a componentwise modeling and a detailed break-up of energy and exergy losses for the considered plant has been presented. Energy losses mainly occurred in the condenser where 134 MW is lost to the environment while only 13 MW was lost from the boiler system. The percentage ratio of the exergy destruction to the total exergy destruction was found to be maximum in the boiler system (77%) followed by the turbine (13%), and then the forced draft fan condenser (9%). In addition, the calculated thermal efficiency based on the lower heating value of fuel was 26% while the exergy efficiency of the power cycle was 25%. For a moderate change in the reference environment state temperature, no drastic change was noticed in the performance of major components and the main conclusion remained the same; the boiler is the major source of irreversibilities in the power plant. Chemical reaction is the most significant source of exergy destruction in a boiler system which can be reduced by preheating the combustion air and reducing the air–fuel ratio.