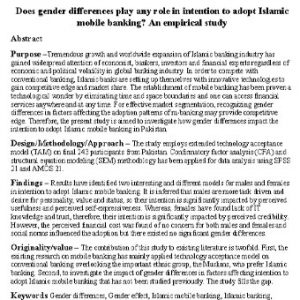 Title: Does gender differences play any role in the intention to adopt Islamic mobile banking? An empirical study

Purpose Tremendous growth and worldwide expansion of Islamic banking industry has gained widespread attention of economist, bankers, investors and financial experts regardless of economic and political volatility in global banking industry. To compete with conventional banking, Islamic banks are setting up themselves with innovative technologies to gain competitive edge and market share. The establishment of mobile banking has been proven a technological wonder by eliminating time and space boundaries, and one can access financial services anywhere and at any time. For effective market segmentation, recognizing gender differences in factors affecting the adoption patterns of m-banking may provide competitive edge. Therefore, this paper aims to investigate how gender differences impact the intention to adopt Islamic mobile banking in Pakistan.

findings Results have identified two interesting and different models for males and females in intention to adopt Islamic mobile banking. It is inferred that males are more task driven and desire for personality, value and status, so their intention is significantly impacted by perceived usefulness and perceived self-expressiveness. Whereas, females have found lack of IT knowledge and trust; therefore, their intention is significantly impacted by perceived credibility. However, the perceived financial cost was found of no concern for both males and females and social norms influenced the adoption, but there existed no significant gender differences.

Originality/value The contribution of this study to existing literature is twofold. First, the existing research on mobile banking has mainly applied TAM on conventional banking overlooking the important ethnic group, the Muslims, who prefer Islamic banking. Second, the impact of gender differences is investigated in factors affecting intention to adopt Islamic mobile banking that has not been studied previously. The study fills the gap.